Four horror novel authors in a haunted house sounds like the beginning of a joke and I’m absolutely loving it. The first half of Scott Thomas‘ Kill Creek is the love child of Blair Witch Project and Cabin in the Woods; it’s clever, spooky and perfectly self-aware in the horror tropes it plays with.

I don’t want to be here.

Kill Creek has a stellar cast of characters and lots of cool concepts but it lacks the right pacing and the angst and fear gets lost when it counts the most. For me it’s an absolute stunner in it’s idea but not with a few difficulties in it’s execution. Kudos to the perfectly suitable cover of the novel. It fits like a glove. 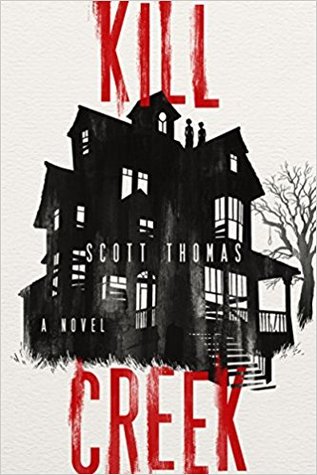 The basic plot is this: four horror novel authors agree to an interview in a haunted house for publicity reasons – which already sounds like a horror fans wet dream. It’s the typical „horror experts fall into the horror movie trap and go-somewhere-they-werent-supposed-to“ trope which is (and forever will be) incredibly entertaining if its done well. (The Object Horror equivalent to Kill Creek’s Place Horror is basically someone playing with an ouija board. Saying Bloody Mary too many times in the mirror is one that comes to mind instantly as Activity Horror.) Another aspect of Kill Creek that furthered my enjoyment was the double meaning of the title (kill creek = kill/murder creek & creek creek (house by the creek)) and the four archetypes of the horror novel authors that were represented in the novel. I’ll stay vage with the characterisation of the mains in general because I want you to get to know them for yourself but let’s just say this: they are all different and all the same with each their own backstory, traits, dynamics and flashback scenes. You get to know them pretty well pretty fast (especially in the first chapters. And later on. And all around in the rest of the novel. Just in general. Period.)

No house is born bad.

Thomas‘ choice of interaction between the different characters was done masterfully. They each bring out a different side to each other that truly tells you more of who they are deep in their core and what drives them. What makes them tick. What their hopes and dreams are. What they fear and feel in their hearts. And what they want nobody to know. It’s incredibly clever and human; their behavior reminds me of people in documentaries. They seem more real, more fleshed-out. Not the paperflat version of people shown on screen that make them seem fake somehow and doesn’t dig into that special portrayal of humanity, emotion and vulnerability that human beings convey in real life. It’s hard to describe but that something is there. Here. In Kill Creek. That’s one of the reasons that make me love it in that aspect –

There’s a better story in you.

Though: I didn’t always love the book. Which is mostly my fault; I kept putting it away because of college assignments and my all over the place mental state. That definitely made it hard for me to properly fall into the story and atmosphere and just let the underlaying horror slowly build. I can’t objectively judge Kill Creek in that aspect (at least not in the first 200 pages.) The pacing was a little weird for me at times and the cut from the first half of the story to the second felt anticlimactic and just threw me off. After that, the story just turned into something that I didn’t expect. Some parts good. Some parts not that good for my personal taste. I lost the motivation for some time before I gave the rest of the pages another shot.

Overall: (+) The characters are human, flawed and perfectly understandable in their feelings and actions, the concept and beginning of the story was top notch and 10/10 to my liking and the underlaying themes and tropes that were used made it a joy to read for the most part.

(-) The pacing was off and the true horror scenes were a long time coming. The middle dragged on and the cut from the first half of the book to the second took me right out of the story.

TW: graphic descriptions of violence and sex, death and murder, mentions of blasphemy + tackles the topic of grief after a loved one dies –> just wanted to mention that because it can be a touchy subject for some