I HAVE DECIDED TO MAKE IT MY GOAL TO POST THE LONGEST RECAP TITLES. eVA. Because I love to be Totally Too Descriptive and Detailed In The Reconstruction of My Past Feelings and Events. Keep reading the next couple of (monthly) recaps TO SEE ME CONQUER THAT LIKE A TOTAL BOSS. It’s going to be LIKE A TEASER TO THE POST, MARSHMALLOWS.  *cue the intro* wait, ALSO HI!!! LONG — *stops intro* sorry! h-u-hmm, Hi!! Long time no SEE, soft hearts!! i’ve been a busy busy busy bee and now i’m back (for at LEAST this post)!! *fireworks start outside your imagined window* i have come to scream into the void of the internet *finger guns* to share All The Thoughts I Had In June and July *dramatic drums start playing in the background* *screen slowly morphes into black* beware, long rants and raves await u.🍀

I HAVE FINISHED MY MEDUSA PAPER AND IT HAS FINISHED ME. June and July will from now on be known as The Dark Months and we will only briefly talk about them in this post because they are DARK and we (mean: me) won’t be DARK here — i mean, there IS  a reason why I chose pink as the color of the month(s) and it’S BECAUSE ITS LIGHT AND FLUFFY AND GIVES THE MONTH(S) A FEEL OF CALM AND QUIET which I did Not Have but Desperately Wish For; so this is basically me manifesting peace and happiness for myself in the coming weeks with sheer will power !! belief!! and trust!! and lots of (old-fashioned) lucky charms!! help me fairies!! 🍀

Quick rewind of the month: I have resdiscovered Tumblr for myself and the key is following content and people that you are interested in, being openminded about niche-categories and genres in the Tumblr community and learn more about them (i have found out that i really like the Dark Academia aesthetic, also modern retellings of greek mythology are definitely my jam) and not feeling bad about unfollowing accounts that make you bored, feel down or not enjoy your time on the site. I really kinda fell back in love with Tumblr as a creative outlet and a way of finding new input for my soul and heart. it’s been great, pals.

Brief (!) Talk About Struggles: I was overwhelmed with all the DEADLINES, definitely often felt DREAD and DESPAIR weighing heavy on my shoulders and went through the first month and a half with super nervous energy because I applied for an internship (btw: GOT IT!! Super excited + super ANXIOUS). I’m scared about the rest of my tasks for this fourth semester + I really need something to destress and focus in the rest of the weeks leading up to my free time (August 10th – August 30th). And because, surely, there are people here who feel me –> Have some luck: 🍀

Other Things That Happened:

*Insert Talk About Look How Happy I’m Making You & Wilder Girls Here.* ⭐⭐⭐⭐⭐ TO BOTH OF THOSE BOOKS. Short review of the first here; short review of the second (not yet) here. (1) LOOK HOW HAPPY was the perfect read at the perfect time; it was fascinating and looked at womens experiences, emotions and thoughts in a way that felt very real and authentic and I will 1000% read another short story collection (or book) from her. (2) WILDER GIRLS was the YA ecological kinda dystopian kinda thriller book I like; it’s female-friendship-focused, includes an f/f romance and lots of Cool Girl Aesthetics!! I linked two pieces of fanart here and here (the links bring you to the artists tweets that feature the fanart). I’m super duper undecided which book to read next: The Anomaly, The Blade Itself, Supper Club or My Lovely Wife??? 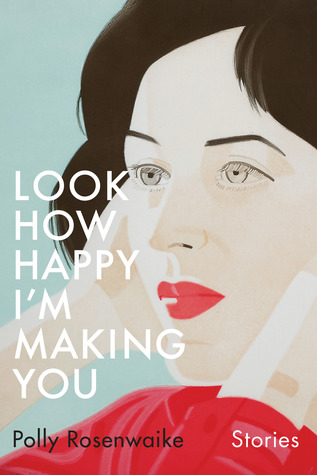 I watched Dark Crystal and it felt very old & very classic. also, i finally understand why the mhhmm at the end of the trailer of the remake was such a fan favorite. my thoughts include: this is such a cool art style, the emperor on his death bed scene was very cool, i totally imagined gelfling being said the way that wildling is sung in the jon snow song from the game of thrones musical special lmao, creatures can be v cruel, „learned the shapes of kindness“ sounds so lovely and i wish there were more twists and turns because this was kinda predictable, a little too long and the most interesting aspects of the story were rushed.

🎤 SHORT BUT IMPORTANT ANNOUNCEMENT: I HAVE FALLEN EVEN DEEPER IN LOVE WITH BELLARKE. I DARE YOU TO WATCH VIDEOS OF THEM AND NOT SEE THEIR CONNECTION AND CHEMISTRY. EVEN IF YOU DON’T SEE THEM AS ROMANTIC, THE LOVE BETWEEN THEM IS REAL AND PALPABLE. 🎤

The first show I watched was Netflix‘ The Society which is kinda The Tribe (that weird kids show where adult vanished and they dressed up and kinda fought each other) meets Lord of the Flies and it was Kinda Cool and I Kinda Really Want to see in which direction they go with the second season. I loved the soft friendships, the theories they came up with, the struggle about how to deal with power and the plenty of mistakes they make that are kinda understandable and kinda not understandable and it’s all kinds of grey. I really appreciated how it went dARK and honest with it’s pain. Super interesting, indeed. Faves: Grizz, Allie, Elle and Helena.

The second and third show I watched were the Turkish shows Hercai and Yemin which are both very different and very similar at the same time. HERCAI is about two people who faLL IN LLOVE (!!!!) and the first (1) is after revenge and wants to betray his bride-(to-be) and the second (2) is treated kinda badly by most of her family and is very fluffy and cute and it’s basically kinda Slytherin and Hufflepuff fall in love and they have very good chemistry and i don’t know if there will be a second season but i hope, hope, hope. Also, the way it was shot WAS HIGH QUALITY.

YEMIN is about two people who faLL IN LOVE (!!) and the first (1) is after revenge because he doesn’t understand why he was forced to marry his bride and wants to betray her and the second (2) is treated very badly by most of hIS family and is very fluffy and cute and talks to her bird. Their romance is slow and i only liked it for the most part because it kinda was very repetitive and the storylines bordered on „torture porn“ (this term makes me uncomfortable but it kinda explain the situation well); after some time it really felt like the MC was hurt, dragged through the mud etc. constantly without reason — just to create more problems and obstacles. painful. ouch.

The fourth TV show I watched was Nachtschwestern (it’s german for Nurses on Night Shift) which is a show about two women (both nurses) who have a history and are forced to work together. it’s short and good and i was positively surprised and happy that it was renewed for a second season. The cases are interesting, the relationships that started to be developed could be really nice and i binged it which translates to: i was into it. i’m a sucker for a doctors in hospitals show. it’s one of my genres lol. keep it comin, german tv

The fifth TV show I watched was Season 3 of Netflix‘ La Casa de Papel and I WAS SO EXCITED FOR IT. I loved the first season, really liked the second and was kinda disappointed by the third?? i thought the set-up was very cool (!!) and (for me) they should’ve definitely used the vacation setting in a massive way and they just didn’t. It felt repetitive at times, could’ve used a better soundtrack + there were definitely more obvious and less surprising twists and turns. I’m just a little bummed out. Faves: Helsinki + Nairobi. big sigh mood about tokyos characterisation, too

Any eco-thriller recommendations? super good nonfiction? also please tell me more good booktubers? (i need to freshen up my dashboard) + tell me your niche genre in tumblr! go, go go!